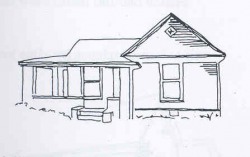 The gabled -ell form has a cross-gabled plan with a front porch stretched across the intersecting gables. The house is usually placed with the long side of the house parallel to the street. The entrance is double sided with doors on each of the wings facing one another.  The houses convey a horizontal plane much like a ranch.  Sometimes the house is located on an alley with the long side appearing perpendicular to the street.  In Prospect Hill some areas of the neighborhood show high concentrations of a single form.  The east side of the 300 block of South Maple and South Euclid and the 900 block of West Howe are good examples of the gabled-ell pattern. 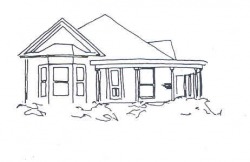 A variant of the gabled-ell, the pyramidal cottage dominates block faces in the 300 block of South Jackson and the 800 block of West 4th Street. Although the plan of the house is similar to the gabled-ell, the entire structure is covered by a hipped or pyramidal roof, so the massing and height are different.  A Pyramidal roof house is generally taller and appears more massive than the gabled -ell, even when the lot coverage is similar.  This form retains the facing front doors and the front porch, although sometimes the porch is recessed or cut-in beneath the principal roof. 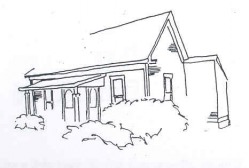 Double-pens are another early vernacular form that first appeared in rural areas and are found in Prospect Hill on scattered sites, although there are many in the western part of the district.  The house is side gabled and symmetrical from the front elevation.  The front porch covers paired front doors. 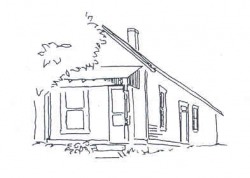 The Shotgun house is visibly narrower than any other form, it is a single room wide and two to three rooms deep. The gables always faces the street and the small shed roof porch stretches across the narrow front façade.  Shotguns are always the smallest width in plan and have minimal mass. These minimal habitations were brought up from the south and often were called railroad houses.

The bungalow form is also single story but can have living space on the second floor with dormer windows providing light.  In Prospect Hill the principle structure is usually topped by a single gable or a hipped roof.  The front porches are large and comfortable and stretch entirely across the front façade. They can be covered by a gable or a hipped roof.  Prospect Hill has several groupings of classic bungalows, some are located in the 700 block of West Third, on South Buckner and South Madison.  The roof shapes are simple and the houses are small and compact in scale compared with pyramidal cottages.


A two story variant of the bungalow is the four square house. These are the most vertical houses in the Prospect Hill Conservation District. Almost always displaying a pyramidal roof, they are massive compared with the typical house.  Besides the row of houses of West Fourth, there are only two other examples of four squares in Prospect Hill.
Prospect Hill Neighborhood | Bloomington IN | prospect.hill.neighborhood@gmail.com | Copyright © 2021